Why is it okay to be sexist about children?

Feminism has done a lot already. I can vote, stay working after getting married, wear trousers, study honours maths, and do numerous other things that I couldn't have done a few generations ago. But we still have a lot to do.

I have been reading some classic science fiction, written in the 1950's and set in the distant future. This has really brought home to me just how far we've come. The author didn't foresee feminism. He thought 'okay, women can vote now, that's that over and done with', or something along those lines. Or maybe he didn't think about it at all. But it can be a little jarring to me, reading about women in a distant future that don't even have as much equality as I do.

A lot of what's left to do is subtle. It's changing perceptions and culture. A lot of it is slippery stuff. We've already won the battle, for the most part, of convincing people's conscious brains that being a woman doesn't make a person stupider, less able, less of a person. People don’t think that women should be treated as lesser, just for being women.

But there are still elements where men and women are treated differently. And often those differences come with value judgements, or have negative effects for one gender. For example, being nice is emphasised in our society for women, but less so for men. This contributes to the fact that women are less likely to negotiate than men are. Which in turn contributes to the gender wage gap. Although we have fixed the system so that you can no longer pay a woman less simply because she is a woman; it is perfectly reasonable to pay someone only as much as they negotiate you up to. The net effect is the same.


Nowhere are these differences in the way people are treated more apparent than in the way we treat children.


Why is it considered okay to be sexist about children? Why are children's clothes so completely categorised by gender when, unlike adults, pre-pubescent children are basically all the same shape (well, actually, they're lots of different shapes, but apart from underwear-wise, it's nothing to do with their sex)? Why is it so hard to get pretty children's shoes that cover the top of the child’s foot? Why do Tesco feel the need to sell two different versions of this toy? 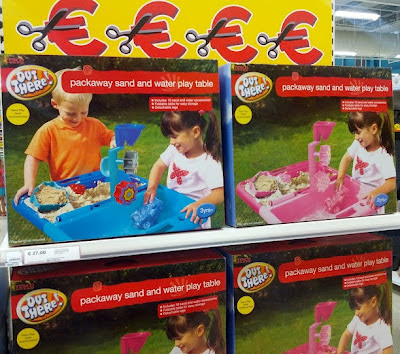 What possible positive outcome is there of things being split this way?

The ‘boys just prefer x and girls just prefer y’ thing holds no water. Even if it was true that most boys like certain types of toys and most girls like other sorts of toys, what harm would grouping the toys by type rather than gender do? A little boy who is slightly inclined towards a pink doll is unlikely to go to the girls toys section to get it, but he might go to the dolls aisle. Why, in a society where the average person would be opposed to laws or regulations that discriminate based on gender, is there such a strong cultural imperative to enforce gender roles in children?
Posted by Saoili at 16:03

Saoili
I am - a mother - a programmer - a runner - a swing and blues dancer - a boardgamer - part of the 99% - a people person - a feminist - a lapsed Catholic, a lapsed Pagan and an Agnostic - fond of maths - perpetually tired - an idealist - a recovering exhibitionist - a mediocre pianist - a pretty bad but enthusiastic singer - a poet - a performer - hoping to get into giving training at some point - white, above the poverty line, healthy, married to a man, and basically privileged up the wazoo and trying to become more aware of it (none of those things would be worth blogging about by themselves, to me, but the privilege thing is) - likely to blog about any and all of the above, but making no promises to stick to these topics.